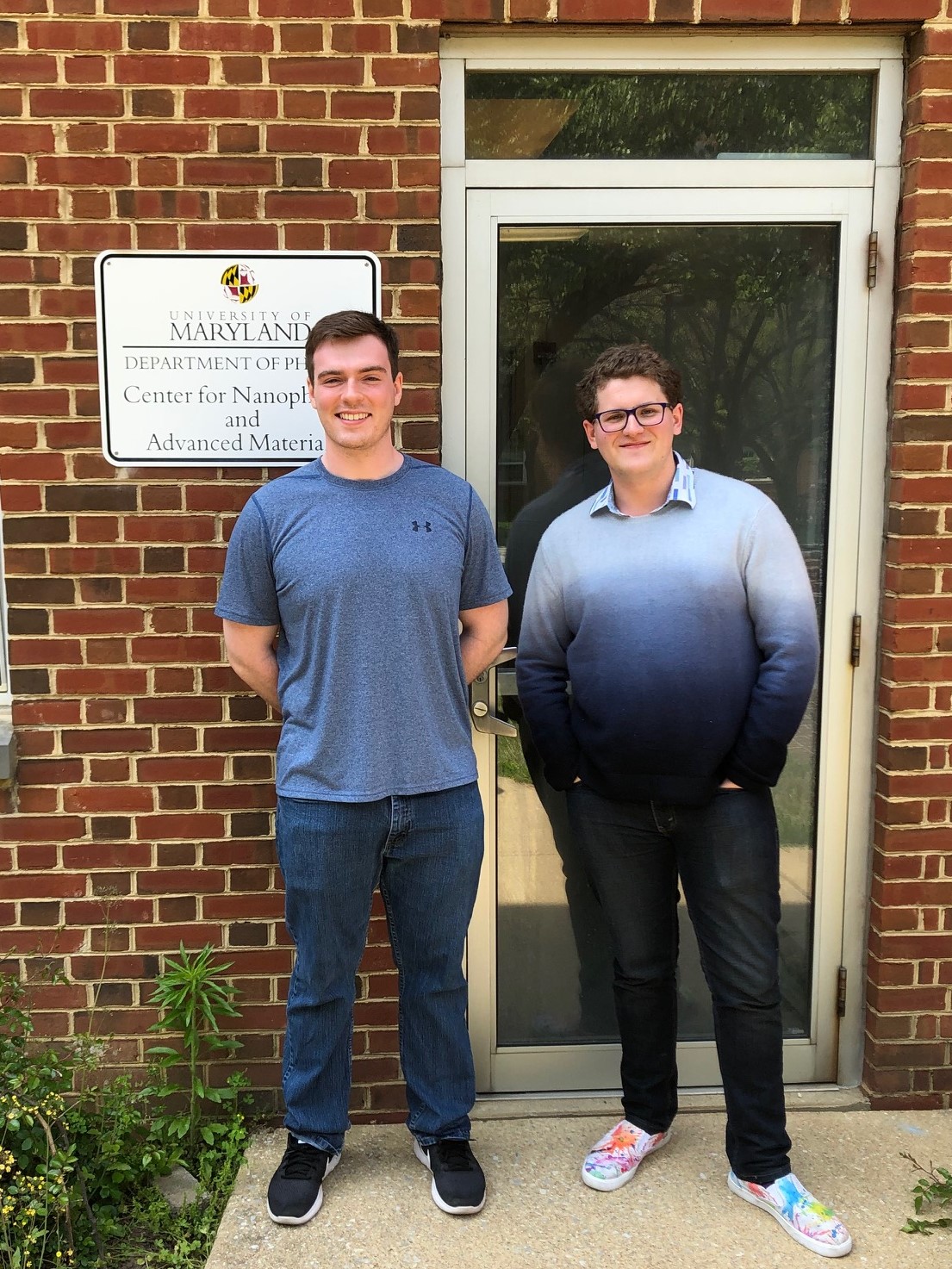 Congratulations to QMC undergraduates Nick Poniatowski and Mark Zic they have been named UMD Undergraduate Researchers of the Year" for 2020 by the Maryland Center for Undergraduate Research. Poniatoswki and Zic were selected from a highly competitive group of nominees working in diverse fields throughout the university, was recognized for thier accomplishments in Physics. 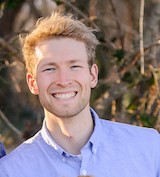 We are pleased to announce that QMC PhD graduate Chris Eckberg is this year's CMNS winner of the Caramello Distinguished Dissertation Award. His dissertation, “SUPERCONDUCTING ENHANCEMENT AND ELECTRONIC NEMATICITY IN SUBSTITUTED BaNi2As2,” was chosen as the winner in the disciplinary area of Mathematics, Physical Sciences, and Engineering.  The Caramello Distinguished Dissertation Award recognizes original work that makes an unusually significant contribution to the discipline. 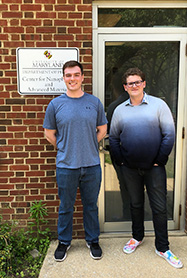 We are pleased to announce that two of QMC's undergraduate researchers Nick Poniatowski and Mark Zic have received National Science Foundation (NSF) Graduate Research Fellowships, which recognize outstanding graduate students in science, technology, engineering, and mathematics. Congrats to both! 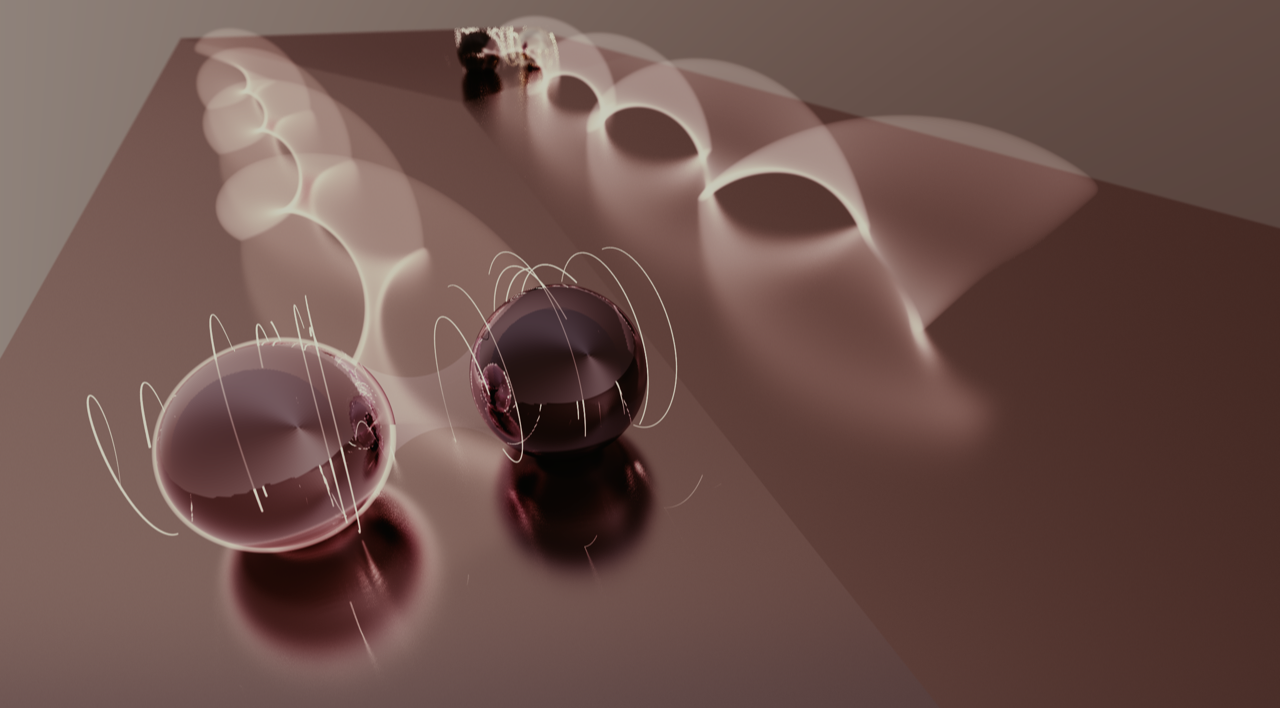 Particle chasing—it’s a game that so many physicists play. Sometimes the hunt takes place inside large supercolliders, where spectacular collisions reveal hidden particles and new physics. For physicists studying solids, the game occurs in a much different environment, and the sought-after particles don’t come from furious collisions. Instead, particle-like entities, called quasiparticles, emerge from complicated electronic interactions that happen deep within a material. Sometimes the quasiparticles are easy to spot, but others are more difficult to find, lurking just out of reach.

Now a team of researchers at the University of Illinois, led by physicist Vidya Madhavan, in collaboration with researchers from the National Institute of Standards and Technology (NIST), the University of Maryland (UMD), Boston College, and ETH Zurich, have used high-resolution microscopy tools to peer into the inner-workings of an unusual type of superconductor, uranium ditelluride (UTe 2 ). Their measurements reveal strong evidence that this material may be a natural home to an exotic quasiparticle that’s been hiding from physicists for decades. The study was published March 26, 2020 in the journal Nature.
The particles in question were theorized back in 1937 by an Italian physicist named Ettore Majorana. Since then, physicists have been trying to prove that they exist. Scientists think a particular class of materials called chiral unconventional superconductors may naturally host Majoranas. UTe 2  may have all of the right properties to spawn these elusive quasiparticles.“We know the physics of conventional superconductors and understand how they can conduct
electricity or transport electrons from one end of a wire to the other with no resistance,” said Madhavan. “Chiral unconventional superconductors are much rarer, and the physics is less well known. Understanding them is important for fundamental physics and has potential applications in quantum computing.”
Inside of a normal superconductor, the electrons pair up in a way that enables lossless and persistent currents. This is in contrast to a normal conductor, like copper wire, which heats up as current passes through it. Part of the theory behind superconductivity was formulated decades ago by three scientists at the University of Illinois who earned a Nobel prize in physics for their work. For this conventional kind of superconductivity, magnetic fields are the enemy
and break up the pairs, returning the material back to normal. Over the last year, researchers showed that uranium ditelluride behaves differently.
In 2019, Sheng Ran, Nicholas Butch (both co-authors on this study affiliated with UMD and NIST) and their collaborators announced that UTe 2  remains superconducting in the presence of magnetic fields up to 65 Tesla, which is about 10,000 times stronger than a refrigerator magnet. This unconventional behavior, combined with other measurements, led the authors of that paper to surmise that the electrons were pairing up in an unusual way that enabled them to resist break-ups. The pairing is important because superconductors with this property could very likely have Majorana particles on the surface. The new study from Madhavan and collaborators now strengthens the case that UTe 2 is one of these superconductors.
The team used a high-resolution scanning tunneling microscope to look for evidence of the unusual electron pairing and Majorana particles. This microscope not only maps out the surface of uranium ditelluride down to the level of atoms but also probes what’s happening with the electrons. The material itself is silvery, with steps jutting up from the surface. These step features are where evidence for Majorana quasiparticles is best seen. They provide a clean edge that, if predictions are correct, should show signatures of a continuous current that moves in one direction, even without the application of a voltage. The team scanned opposite sides of the step and saw a signal with a peak. But the peak was different, depending on which side of
the step was scanned. “Looking at both sides of the step, you see a signal that is a mirror image of each other. In a normal superconductor, you cannot find that,” said Madhavan. “The best explanation for seeing the mirror images is that we are directly measuring the presence of moving Majorana particles.” The team says that the measurements indicate that free-moving Majorana quasiparticles are circulating together in one direction, giving rise to mirrored, or chiral, signals. Madhavan says the next step is to make measurements that would confirm that the material has broken time-reversal symmetry. This means that the particles should move differently if the arrow of time were theoretically reversed. Such a study would provide additional evidence for
the chiral nature of UTe 2 .
If confirmed, uranium ditelluride would be the only material, other than superfluid He-3, proven to be a chiral unconventional superconductor. “This is a huge discovery that will allow us to understand this rare kind of superconductivity, and maybe, in time, we could even manipulate Majorana quasiparticles in a useful way for quantum information science,” Madhavan said.
This story was originally published by the Grainger College of Engineering at the University of Illinois. It has been adapted with minor changes here.